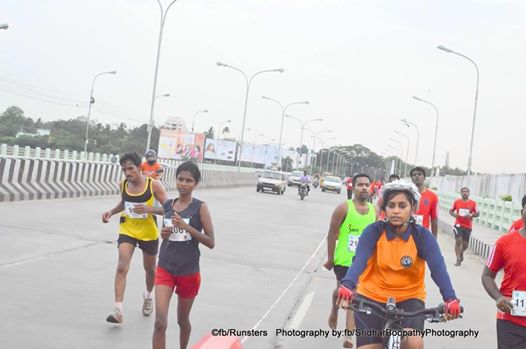 She only finished third though, not because she didn’t try, but because in the finishing lap, she couldn’t accelerate due to all the 10K ocean she had to merge into. I did my best to clear way for her, but still it was not enough. Anyways, as we were running, a western man of unknown nationality caught up with us and asked me, “Is she, the woman first runner?” I said, “Third!” He excitedly turned to his friend and exclaimed, “Third!” and sprinted, to be overtaken by her about a kilometer later. My heart swelled with pride as though it was I who beat him. I guess the foolish Indian sentiment! This powerfully built man, a forieghner, who from the looks had everything going for him, caught up with us again and this time elaborately asked in what I thought was a mocking tone, “So… How.. is… it…. going?” and breezed past us. And again, she beat him!! This time, my heart didn’t have place to swell any further. It did a cartwheel instead. My country woman could outbeat a western elite man runner!!

As soon as she crossed the finish line and I got down my bike, she literally fell over me shaking my hands and grabbing my shoulders and told me how helpful I was to her. And for the first time I noticed her face in close up. Her lips had blistered. There were two big wounds at either side of the mouth, the hair was dry and the dry skin was notable even amidst all the sweat. She asked to make a call from my mobile to her mom and told her in a feeble voice that she won. I asked for her number and she said she doesn’t own a phone and I was free to contact her on her mom’s phone. We got into chit chatting and I came to know that she was 20 yrs old, from Pudukkottai, Dirt poor, No proper food at home leave alone the nutrition that an elite runner should consume, cannot afford proper training, can’t even afford the shoes that a running of this kind might require. And she came third amidst 2000 odd runners! What grit? 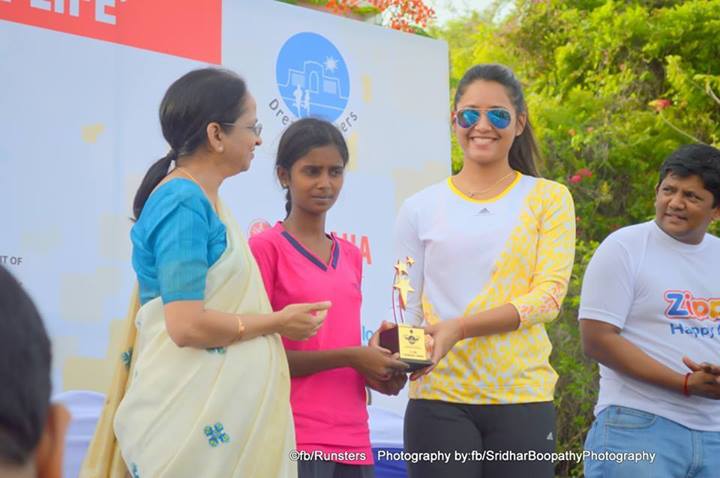 As she left me to change her clothes, I couldn’t help but laugh at myself for the fuss I make about nutrition after just about a 2k run or a 5k cycling. Though I love India, it was one of the times when shame flooded me to think of a nation which neglected sportsmen like this to waste away in poverty and hunger and denied them the grooming that they so rightly deserve.